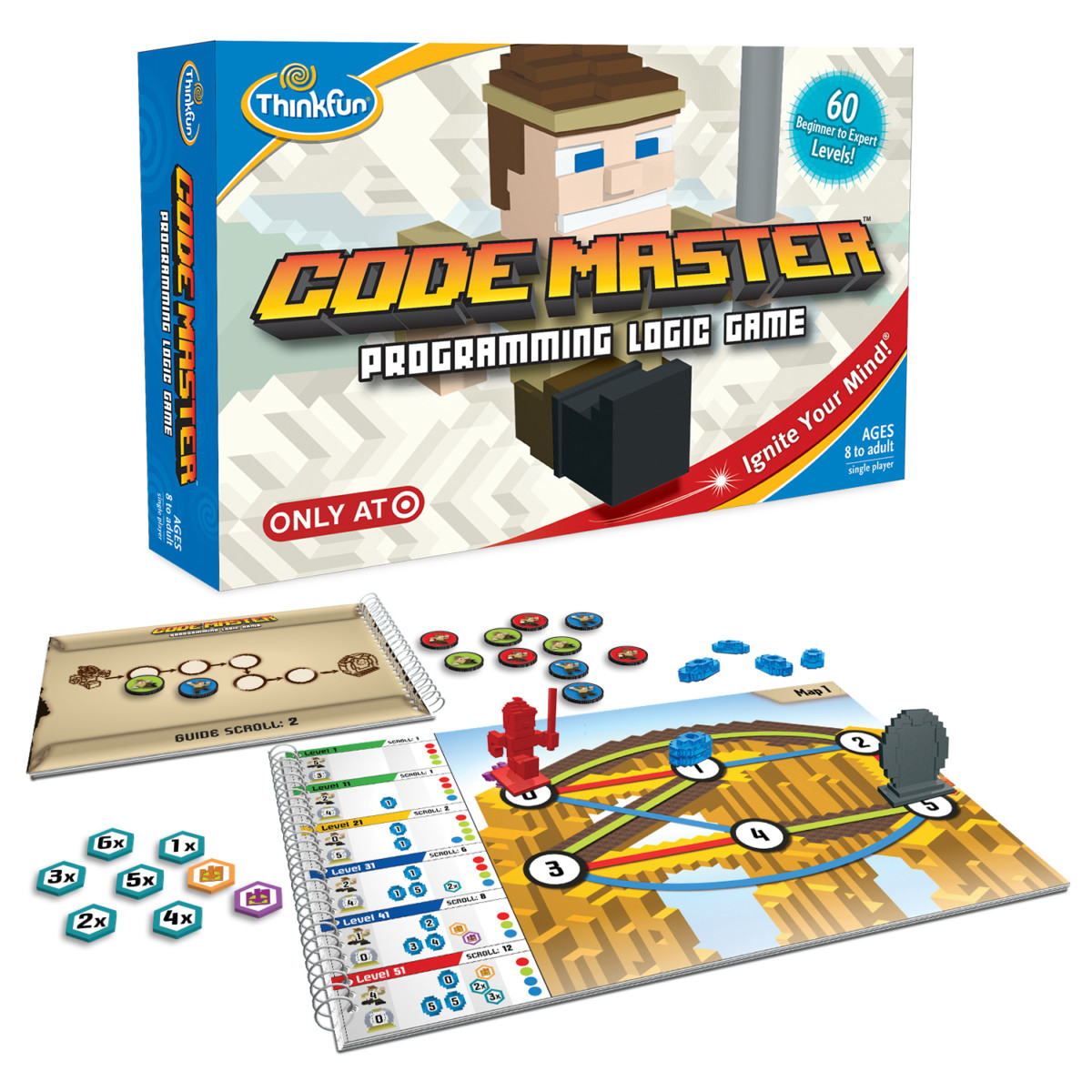 “Code Master: Programming Logic Game” is a board game that can be played by kids, adolenscents, and adults (8+ years). It is designed to be a single player game, but it can also be played by two or three people who then decide on the actions to take in a collaborative way.

Make programming fun by learning the basics without a computer! In Code Master, your Avatar travels to an exotic world in search of power Crystals. Along the way, you use programming logic to navigate the Map. Think carefully, in each level, only one specific sequence of actions will lead to success. Once you collect all the Crystals and land at the Portal, you win! Playing Code Master won’t just teach you principles behind programming, you’ll also build planning, sequential reasoning and problem-solving skills.

Code Master is a board game made from cardboard and plastic, requires no electricity, no computing device, and no screen. It costs about 20€ to buy it. The game includes the following pieces: an avatar, a portal, 6 crystals, 10 maps with 60 levels, 12 guide scrolls, 12 action tokens, 8 conditional tokes, and instructions with solutions. It is relatively robust and lightweight.

This game proposes 60 different tasks where the players need to “program [their] Avatar to collect all the Crystals and land at the Portal. In levels where there are no Crystals, [their] Avatar just needs to get to the Portal”. According to the author of this game “Playing Code Master won’t just teach you principles behind programming, you’ll also build planning, sequential reasoning and problem-solving skills”. The game is about giving instructions to move around an avatar and reach a target location on the board, after going through potential intermediary locations. The game is also about debugging programs that you have created when you see that you do not reach the target location or miss to pass through another required location. It also implements “loop paths”, which bring the avatar back to its current location and conditions (if… then). Mark Engelberg, the creator of the game, is a programmer of virtual reality simulations for NASA and has been a teacher for computer science and mathematical logic with many years of experience.

From a pedagogical point of view this learning resource uses gameplay as an implicit or stealth learning experience. Players are supposed to learn key programming principles in a fun and easy to learn way. Learning can take place by trying and testing certain solutions. The game provides relatively self-explaining instructions so that even younger children start playing with too much help from an adult and advance from simple tasks to tasks of increasing complexity. Learners learn by acting and touching concrete materials, that represent “programming” concepts. There is a story-telling element here, since the learners are invited to immerse themselves in a fantasy world where they help the character represented by the avatar to solve problems by collecting jams and reaching a portal that send them through a complex and interconnected maze. From a learning theoretical perspective, computational thinking is here conceptualized as comprising the “step-by-step execution of a sequence of instructions in your mind’s eye” and then the act of “visualiz[ing] how the instructions will play out” in a real-world situation. This makes learning very tangible and concrete. The game allows children to work in a relatively autonomous way without permanent intervention or supervision by a teacher (or a parent). It can however by interesting to ask children to verbalize, later, what they have learned by playing the game, otherwise their learning processes might lead to rather tacit and action-based knowledge instead of leading to more abstract and conceptual knowledge about computational thinking. Teachers can let individual pupils play the game or put 2-3 pupils in front of the game and ask them to solve the proposed problems in a collaborative way; one pupils could also act as the CPU who executes the instructions given by another pupils and the third one could act as the controller, who checks if the CPU correctly execute the instructions and if the desired goal is reached.

Overall, this boardgame allows to teach certain basics of programming to young children, adolescents, and adults without using any electricity, computer, or screen. It can appeal to teachers because it closely resembles other boardgames that children play. The different levels of difficulty proposed by the different maps can be used to smoothly increase the complexity of the game. Moreover, this game puts a strong emphasis on logical thinking in problem-solving which can nicely fit into the school curriculum.

Back to the overview of analyses