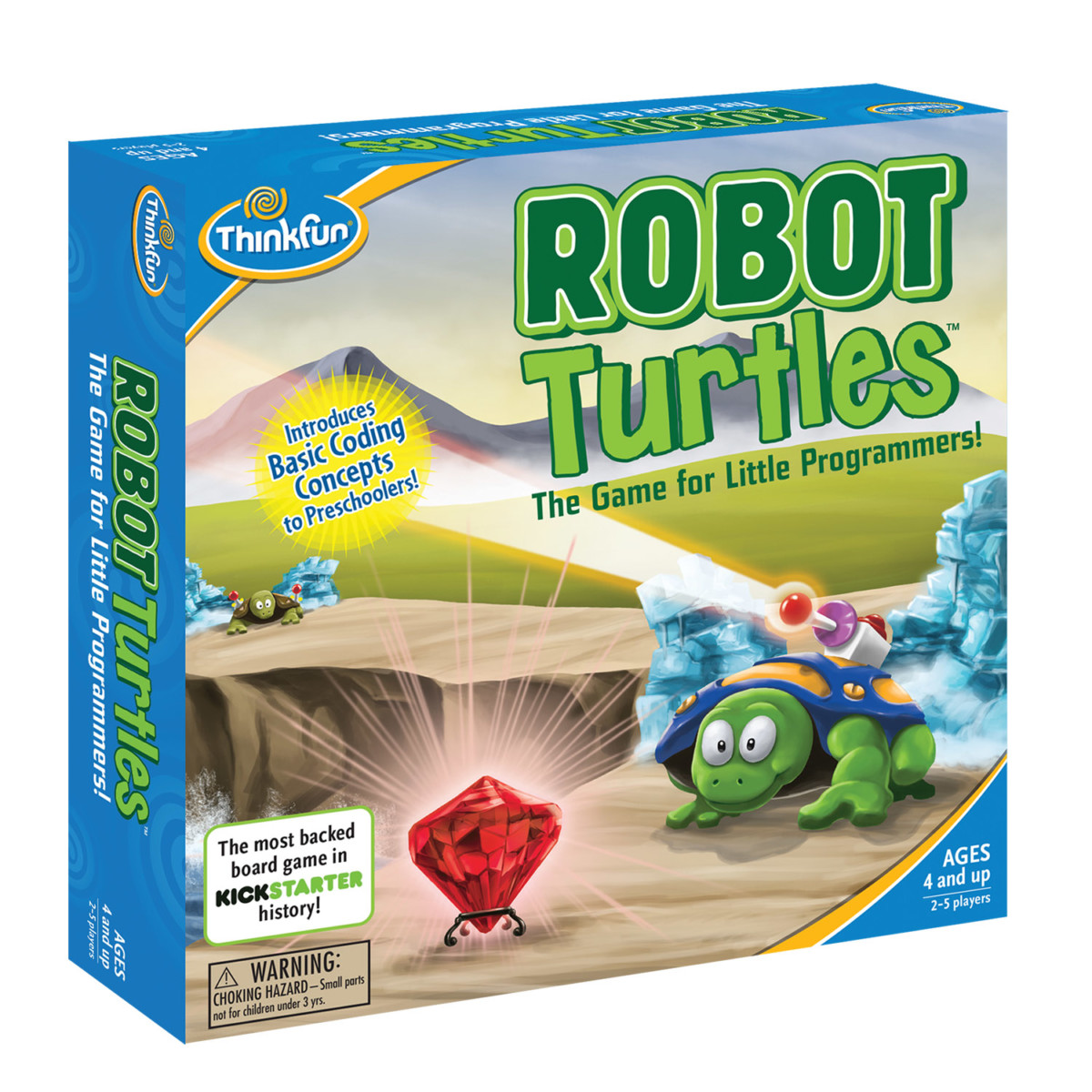 ROBOT Turtles is a board game to play with kids (3-8 years). It teaches the fundamentals of programming in a fun and tactile way. It can be played by 2-5 players. It has levels of increasing difficulty when obstacle tiles and more complex code cards are used. It was inspired by the LOGO programming language.

ROBOT Turtles is a board game made from cardboard, requires no electricity, no computing device, and no screen. It costs about 35€ to buy it. An adult is supposed to play the role of the Game Master and thus to execute the instructions given by the players. They lay out these instructions (to move their turtle) with the help of paper Code Cards (Forward, Left and Right). The Turtle Tiles are placed on the game board with 8×8 cells. The Jewel Tiles indicate the cells that the turtles need to reach. There is a Bug Card that can be pressed to tell the game master that they want to undo a move (or a sequence of moves). There are additional instructions cards and board tiles that can be used to increase the complexity of the tasks to solve, like lasers to melt ice walls. In addition, kids can print out their own black-and-white turtle tiles and paint and decorate them as they wish.

The game was inspired by the LOGO programming language and uses simple commands (move forward 1 cell, turn 90° to the right and turn 90° to the left) to instruct the turtles to move around on the board. In addition, players can use extra commands, like a laser to destroy obstacles and use the Frog Card to define and execute certain recurring sequences of instructions. It was designed by programming expert and dad Dan Shapiro. He claims that the game helps to develop basic knowledge of programming. The Bug Card refers to the process of finding errors in your instructions and re-running them after doing corrections.

From a pedagogical point of view, this learning resource uses gameplay as an implicit or stealth learning experience. Children are supposed to learn key programming principles in a fun and easy to learn way. Learning can take place by trying and testing certain solutions. The game provides relatively clear instructions in the manual that adults (parents and teachers) can use to start playing immediately and then to provide children with tasks of increasing complexity. According to the author, an adult should play the role of the CPU, executing the instructions given by the children, and, most importantly, do funny noises to create engagement. After a while, kids can also play that part and take turns. It is however important that the person playing the CPU part executes the instructions exactly as they are given. The game allows for additional rules, cards, and tiles to be developed and included. As a teacher, you could for instance decide to give different tasks to the different players, each according to their abilities. According to the rulebook, play continues until all players collect a jewel, so everyone wins, sooner or later. Not all children understand this right from the start, so there is a certain risk that those finishing second, third and fourth during the same round feel that they have lost the game.

Overall, this board game allows teaching certain basics of programming to rather young children without using any electricity, computer, or screen. It can appeal to kindergarten teachers because it closely resembles other board games that children of that age play. The different levels of difficulty proposed in the manual can be used to smoothly increase the complexity of the game. But there is also enough space for creative adaptations to rules, to cards, and to tiles to be made, ideally together with children. There is a certain risk of frustration if children do not understand that each person who finishes during a certain round is a winner.